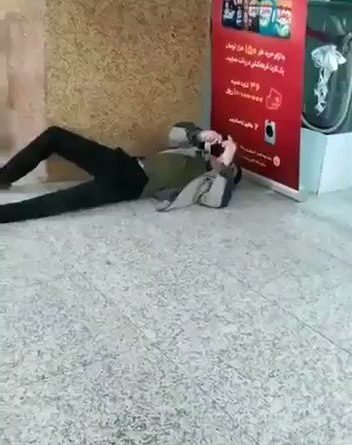 WARNING- disturbing video
Tabriz, NW #Iran
Video shows an elderly man suspected of being #COVID19+ having seizures on the sidewalk. Passersby come to his aid at the end of the video with no ambulance in sight. pic.twitter.com/fnb1FN4PgE

Asaluyeh, S #Iran
Voice says this individual who has collapsed is infected with coronavirus.

Such scenes indicate the COVID-19 pandemic has engulfed all of Iran & the reports/numbers provided by the regime are nothing but lies.#coronapocalypse pic.twitter.com/RfcVdymd5p

Tehran, #Iran
Another suspected #COVID19 man on the ground struggling to stand up. Reports indicate that he’s been like this for 30 minutes without being taken to the hospital. pic.twitter.com/sU3lffjwfd

Shahin Shahr, Isfahan, central #Iran
A man, suspected of being infected with #COVID19 has collapsed on the ground near a hospital. He’s asking people not to get near him. pic.twitter.com/WAmC5nPOYv

March 11- Shahr-e-Rey, Tehran, #Iran
Another person suspected of being #COVID19 positive has collapsed on the street in the capital.
And these are just the cases caught on video.
3k+ have passed away so far in the country. The regime has only announced 354 deaths. pic.twitter.com/vkMA1N5TnJ

Unfortunately, this is becoming the new norm across Iran as officials are refusing to take adequate measures.#COVID19 pic.twitter.com/zemr0GrEUS

The situation is worse than China, women fallen on the street with Corona and many poeple around her!

Man with corona virus fallen on the street, suffering without help

People with corona falling and suffering in the streets had become a norm in Iran, the situation in Iran is alarming #Coronavid19 #CoronavirusOutbreak #CODVID19 #Iran #SaveIran pic.twitter.com/xM6AFWRCqu

Marvdasht, Shiraz, SW #Iran
Another man suspected of #COVID19 collapsed on the ground in Marvdasht.
At least 2000 Iranians have died since the beginning of the outbreak due to the regime’s incompetence. pic.twitter.com/XkdZThyRdq

Rasht, N #Iran
Rasoul Akram Hospital
Voice says the hospital is full & they’re not allowing this sick old man inside. He appears to be suffering from the coronavirus.
Millions of Iranians are at risk due to the regime’s refusal to properly address the epidemic.#COVID19 pic.twitter.com/4UbryV8Meo

Bandar Anzali, N #Iran
Voice says man, suspected of #COVID19, has fallen several times and hit his head, but despite several calls by distraught locals, hospitals say they don’t have ambulances.
In the end, another man takes him to the hospital in his own car. pic.twitter.com/xzCEVUcOxL

Arak, Markazi Province, central #Iran
Video shows a man suspected of #COVID19 lying unconscious on the ground in the city of Arak. pic.twitter.com/gbXCM7p1U3

March 5 – Karaj, west of Tehran, #Iran
Voice says this man collapsed due to the #coronavirus yet authorities say he threw himself off the road above.

Authorities care nothing about the people & are going the distance to cover-up the truth about #COVID19 in Iran. pic.twitter.com/3fKBaU00wO

More #Iranians, suspected of being #COVID19 positive, collapsing on the streets of #Iran.
Voice says the elderly man was on the ground for an hour before the emergency dept. finally came. pic.twitter.com/SS5IPdu8BS

Reminder:
Regime president @HassanRouhani said everything will be completely fine by Feb. 29.

Me:
When such incidents are occurring across the country, rest assured the official stats of only 92 deaths is yet another lie from the mullahs’ regime.#covid_19 pic.twitter.com/cMRrn2ZgPR

“There’s a suspicious coronavirus case here in Varamin’s main street,” the man says.
This is becoming the new norm in Iran, indicating tens of thousands could be ill.

Reminders:
-Over 1,200 #coronavirus deaths in #Iran – via opposition MEK

Allegedly this man fall down to the ground suddenly due to #coronavirus. The man can be seen wearing a Mask aswell#COVID19 #COVID2019 #CoronaOutbreak pic.twitter.com/CGMtig5loY

Report: Officials were aware of coronavirus deaths as early as Jan 30

Chalous, N #Iran
Voice says this soldier, suffering from #COVID19, has collapsed in what seems to be a mall in the northern city of Chalous. pic.twitter.com/mb5unPFQFC

Southern Tehran, #Iran
Voice says a man infected with #COVID19 has collapsed at a bus station in southern Tehran and warns others not to get close to him. pic.twitter.com/HutdRh47Kd

A corona patient has fallen in a public street with many poeple passing by.

The virus is spreading very rapidly in Iran and precautionary measures are not taken #irancorona #Corona #COVID19 #CoronaOutbreak #Coronavirus pic.twitter.com/oXNmGcqIGZ

Shiraz, #Iran
Voice says the man has fallen to the ground & has #coronavirus.

Reports:
-Many hospitalized in Shiraz; at least 7 dying in 3 hospitals each day
-Security units secretly burying the victims
-Hospital staff not allowed to announce these deaths as COVID-19 cases pic.twitter.com/IxbkOHtl58

Feb 29, Enghelab Square, Tehran, #Iran
Eyewitness: a man collapsed on the street with a coughing fit and when we wanted to approach him he said he was sick and that we shouldn’t come close.
– The video shows him being taken away by healthcare workers in hazmat suits. #COVID19 pic.twitter.com/Z8og69y6K5